Here’s another short story about the images on the extract we discussed in the Fancy Flannels.

This time we’re interested in the coin icon for London 1851, found at the top left, see below.  What can this image tell us about George Lawton and Sons textile manufacturers of Vale Mill? 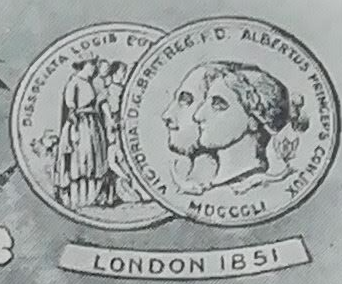 Eighteen Fifty One was the year of 1851 Great Exhibition in Crystal Palace, London.  International exhibitions were a popular way of showcasing  national art and industry in the nineteenth century. They were magnificent, elaborate occasions held in buildings specifically built for the event and the London event attracted over 6 million visitors.  Exhibitors came from all over the world to join the showcase of British exhibits, some born out of the advances  made as part of the Industrial Revolution.

The best quality exhibits were given awards, often commemorated by a medal.  We discovered the exhibition catalogue in 1851 had been digitised and found that George Lawton of Messrs Lawton, Vale Mill, was listed as a juror for the  ‘woollen and worsted manufacturers’ exhibits, some of which were from  Ashton under Lyne. (7th row in image below).

The medal image above is the award George Lawton received for his work as a juror which would have included report writing etc. The image below is an accurate illustration of 1851 juror medals currently on display at the V & A museum, see here for more detail on these. We’re sure that Mr. Lawton’s appointment would have been considered an honour and according to the Royal Commission his appointment reflected his ‘standing’ and expertise within the industry. Because George Lawton was a judge, Messrs Lawton would have been precluded from entering their cloths and winning any awards for exhibits on this occasion.

There is also an image for Paris 1867, some years later on the extract, was this for another jurors role? It seems not, George Lawton had died in 1856, but according to reports in the Manchester Guardian, July 4th, 1867, p.3 George Lawton and Sons exhibited their woollen fabric in the National Exhibition in Paris and won a silver award.  A French correspondent on the event further notes that Messrs Lawton’s cashmere dyes were exceptional.

Here is the medal awarded in Paris

It wasn’t always the bosses that got to attend exhibitions thankfully. Closer to home, to celebrate Queen Victoria’s 50th year on the throne there was a Royal Jubilee Exhibition in White City, Manchester in 1887. Among the 4.5 million visitors were 300 ‘workhands’ from Vale Mill and mills in Diggle who had a ‘treat day out’ to attend it. As far as we know, no medals were awarded to Messrs Lawton… but let’s hope the workers enjoyed themselves given the few leisure hours they had at the time.

With thanks to The Royal Commission on the Exhibition, 1851 for their assistance.