Vignettes, visages, vernaculars and verse. Lancashire rhymes and homely pictures of the people.

Samuel Laycock is famous for being a poet in the old Lancashire dialect. By birth he’s a Yorkshireman, born in Marsden on January 17th 1826. Sam moved to Stalybridge with his family aged 11 in October 1837, where he worked for 17 years as a weaver, then 7 years as a cloth locker.

All the while he was working, Sam was deveoping his writing. A real man of the people, he wrote the stories of the working men and women around him in his verse, trying out his poems in the mills and contributing his writings to newspapers and magazines.

Sam was also a keen photographer and had a studio in Mossley. He married his second wife Eliza Pontefract, in June 1864 at Abneey Congregational Chapel on Mossley Brow and he’s know to have spent a lot of time in the town in the 1860s. After the Cotton Famine struck in 1862 there was no work in the mills any more, so photography was another way for Sam to make a living. Sam was also a librarian at the Stalybridge Mechanics Institute, which is no doubt where he honed his litterary craft.

“Laycock, as an interpreter of thought and feeling, is full of that energetic buoyancy and relish for fun so peculiar to Lancashire working folk; and though essentially the poor man’s poet, having sounded the depths of poverty and felt the pinch of want, there is nothing in him of disappointed meanness…” 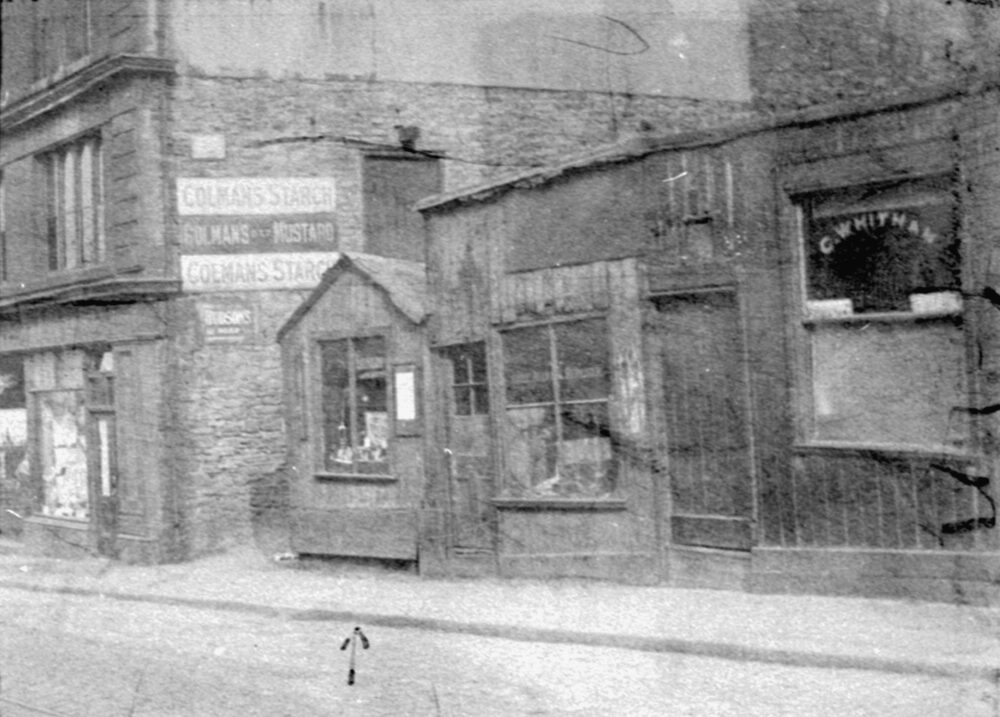 Samuel Laycock’s photographic shop was located at 83 Stamford Road. As you can see from the image above, it was little more than a wooden hut, in complete contrast to the tall, stone buildings that were it’s neighbours. And as far as we know, this is the only image of his stuido that exists.

The photo below shows the gap between the buildings where Laycock’s photographic shop used to stand on Stamford Road. Before these shops too were demolished in the last 1990s.  The site has never been built on since and remains today an empty plot of grass. Use the button below to open the what3words mapping site and find the location of Samuel Laycock’s Photography Studio today… 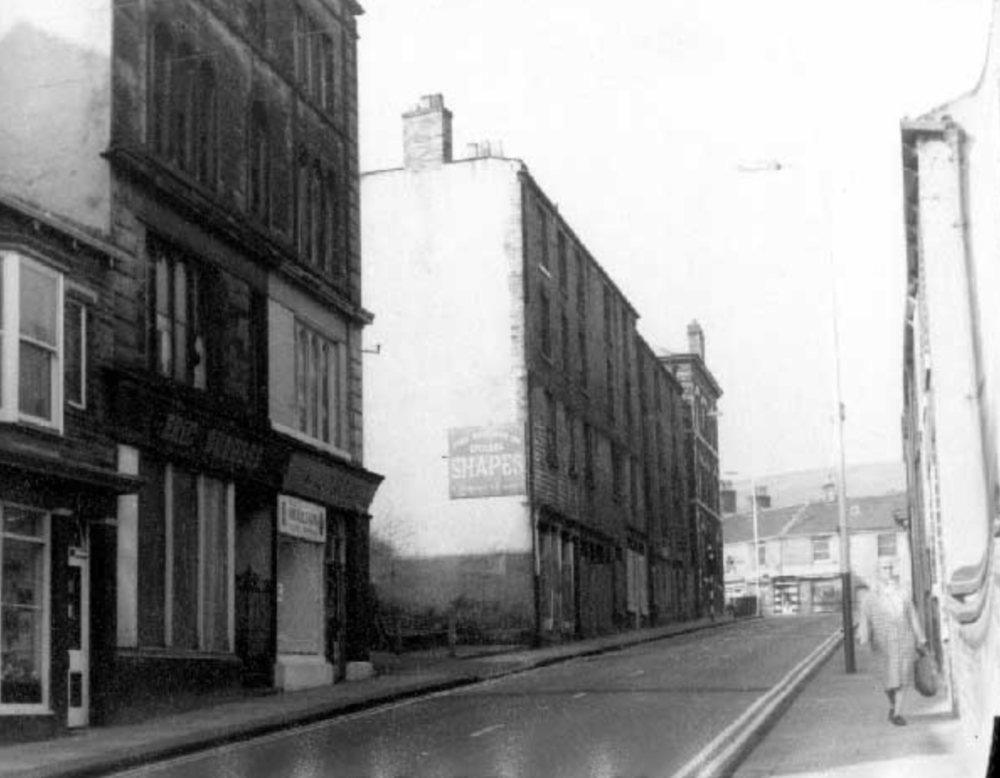 There is in fact very little history of Sam being a photographer, or his time in Mossley. Most of the history of his life focuses on his literary works and poems. But it is known that after falling ill, he moved to the coast to improve his health, where to found work as a photographer in Blackpool in 1868. Laycock died on the 15th December 1893 and is buried in Layton Cemetry, Blackpool. 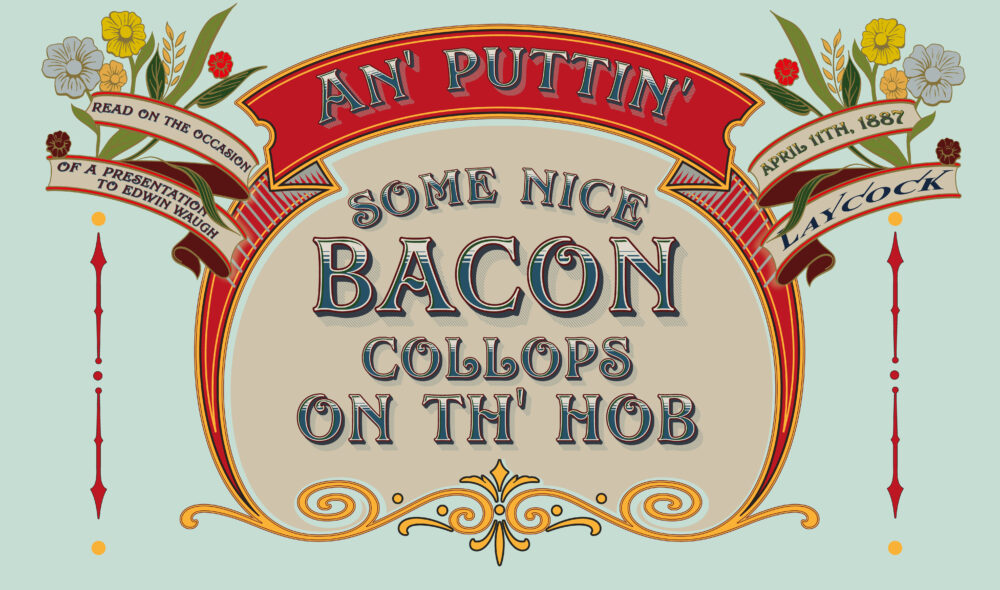 New artwork by Signs by Umberto using text from an address given by  Samuel Laycock in 1887. This artwork is part of a new exhibition at Mossley Train Station. Eleven intricate sets of panels are fitted along the platform and in the station waiting room, drawing inspiration from the vintage signage and advertising typography of Mossley’s local retailers through the ages, including long-gone butchers shops, photography studios and drapers. 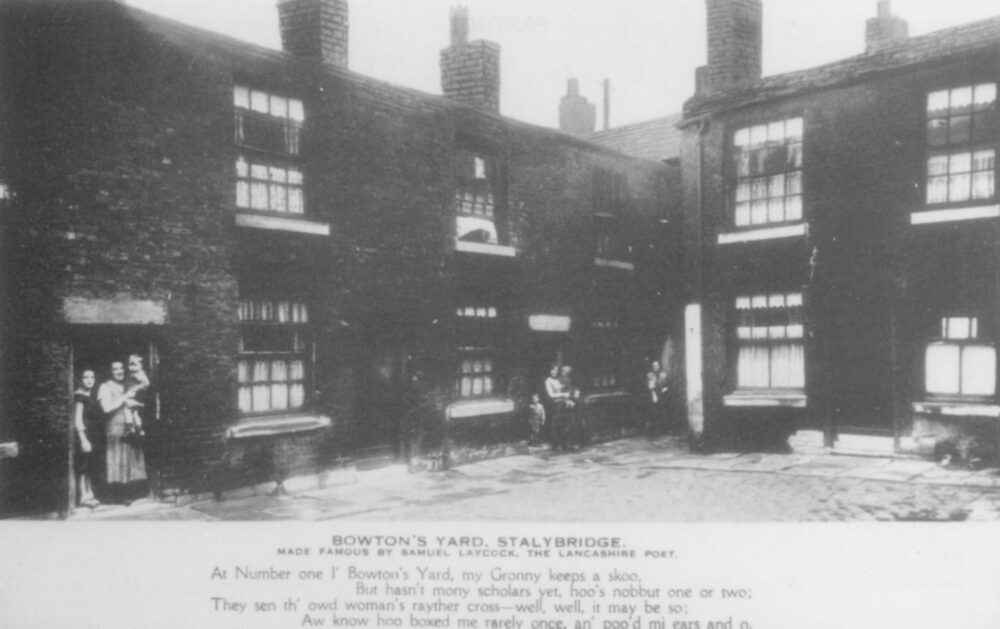 Bowton’s Yard was a residential area of Stalybridge consisting of 12 houses. The area has since been redeveloped and is now the site of the Tesco petrol station. The lives of it’s residents have been immortalised in one of Samual Laycock’s most famous poems. Although the poem would suggest Laycock and his family lived here, at Number 5, it’s belived this is in fact more poetic licence than the actual truth. [1]

The poem is written in Lancashire dialect. See if you can read it. How do you sound? Can you work out what it says about the characters at each of the different houses? Have a listen to the poem being read in the video beow. And if you really need a translation, you can find one along with more photos of Bowton’s Yard in this TMBC Local Studies REACHING OUT learning resource.

At number one, i’ Bowtons yard, mi gronny keeps a skoo,
But hasn’t mony scholars yet, hoo’s only one or two;
They sen th’owd woman’s rather cross,-well, well, it may be so;
Aw know hoo box’d me rarely once, an’ pood mi ears an’ o.

At number two lives widow Burns -hoo weshes clooas for folk
Their Billy, that’s her son, gets jobs at wheelin’ coke;
They sen hoo coarts wi’ Sam-o’-Neds, at lives at number three;
It may be so, aw conno tell, it matters nowt to me.

At number three, reet facin’ th pump, Ned Grimshaw keeps a shop;
He’s Eccles-cakes, an’ gingerbread, an’ treacle beer, an pop;
He sells oat-cakes an’ o, does Ned, he has boath soft an’ hard,
An’ everybody buys off him ‘at lives i’ Bowtons yard.

At number four Jack Blunderick lives ; he goes to th’ mill an’ wayves
An’ then, at th’ week-end, when he’s time, he pows a bit an’ shaves;
He’s badly off, is Jack, poor lad ; he’s rayther lawm, they sen,
An’his childer keep him deawn a bit-aw think they’n nine or ten.

At number six, next dur to us, an close o’th’ side o’th’ speawt,
Owd Susie Collins sells smo’ drink, but hoo’s welly allis beawt;
But heaw it is that is the case awm sure aw conno tell,
Hoo happen maks it very sweet, an’ sups it o hersel!

At number seven there’s nobdy lives, they left it yesterday,
Th’ bum-baylis coom an mark’d their things, and took ’em o away;
They took ’em in a donkey-cart-aw know nowt wheer they went
Aw recon they’n bin ta’en and sowd becose they owed some rent.

At number nine th’ owd cobbler lives- th’owd chap ‘at mends my shoon,
He’s getting very weak an’ done, hell ha’ to leov us soon;
He reads his Bible every day, an sings just loike a lark,
He says he’s practisin’ for heaven-he’s welly done his wark.

At number ten James Bowton lives-he’s th’ noicest heawse i’th’ row;
He’s allis plenty o’ sum’at t’ eat, an lots o’ brass an’ o;
An’ when he rides an’ walks abeawt he’s dress’d up very fine,
But he isn’t hawve as near to heaven as him at number nine.

At number ‘leven mi’ uncle lives-aw co him uncle Tum,
He goes to concerts, up an deawn an’ plays a kettle-drum;
I’ bands o’ music, an’ sich things, he seems to tak’ a pride,
An allis maks as big a noise as o i’ th’ place beside.

An’ neaw awve done aw’ll say good-bye, an’ leave yo’ for awhile;
Aw know aw have n’t towd mi tale i’ sich a first-rate style;
But iv yor’e pleased awm satisfied, an’ ax for no reward
For tellin’ who mi nayburs are at live i’ Bowton’s yard.