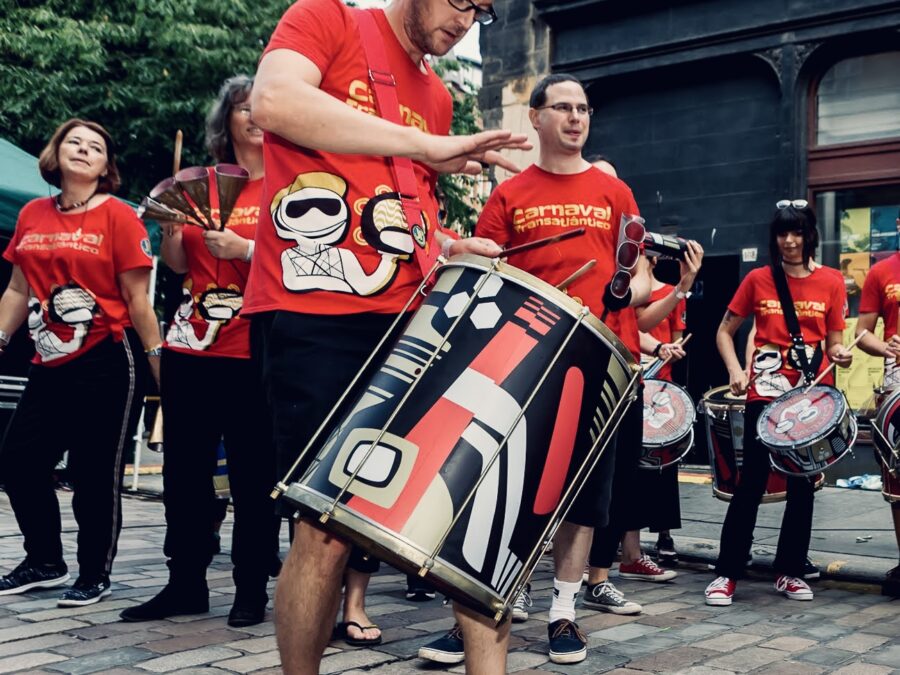 JP Courtney is a professional percussionist, performer, tutor and event
organiser from Ireland.

He specialises in folk and carnival music from Cuba and Brazil and is considered the best
talent in his field in the UK whilst al being a reference for rhythmical information on the
modern street carnival of Rio de Janeiro.

As well as performing with many groups around the UK he is currently teaching several
Brazilian carnival music projects great success. Some performances to date include Womad, Thames festival, Glastonbury and Rhythms of the World festival, Rio carnival and many venues and events in Rio de Janeiro including
Circo Voador, Fundição Progresso, Carioca da Gema, Encontro de Blocos.

Having been a member of the Monobloco show band and also played in the majority of baterias in the top samba school league in Rio, JP is well placed as an educator of the modern sounds of the “Carnaval Carioca” (Rio carnival)
He regularly travels to Brazil where, as well as performing, he also organises his internationally renowned percussion residential course called Escola de Bateria Rio. The course brings people from all over the world to study with the best musicians in Rio. He has taught workshops in Rio to great success. Most recently with the members of
DuRio. A bloco run by past members of Monobloco. He has also taught at the British school there.

JP has completed two musical tours of Rio with his groups. One tour included his group being the only non brazilian based carnival bloco to ever have been officially registered in the street carnival of Rio. In February 2014, JP took 45 of his students to take part in his prestigious Carnaval Transatlântico project.

The group produced their own performances in the most famous carnival venues in Rio as well as putting on its own traditional street carnival parade. JP was also a director of the internationally successful Cultural Olympiad project Rio Lapa
Londres. The project brought together members of all of J P’s blocos together with members from Monobloco and Sargento Pimenta in a parade to welcome the Olympic torch to London.

JP’s teaching style is unique. He combines musical accuracy with great technical ability and up to the minute knowledge which is delivered in his own unique and humerus way. He is regularly asked to travel and teach other groups who play Brazilian percussion. He has been all over the UK and also taught workshops in Ireland and Spain and the
Netherlands. He is also regularly asked to teach alongside other brazilian touring artists when they are
giving workshops in Europe. He was also invited to help organise a Samba Encontro in Rio de Janeiro during Carnaval
2012. In his Cuban guise, J P plays Rumba, Bata and Cuban carnival Percussion and also sings. He has been a member of Dilanga. A successful Group playing a mix of folk styles from Cuba with vocal harmonies. He was also a musical director of the carnival group based in London called Orchestra
Bombo. J P is also an event organiser and is credit with organising the hugely successful Brazilian Carnival Encontro in Luton, UK. A festival of Brazilian carnival culture from around the world. Attended by masters of brazilian carnival culture and 100’s of members of brazilian carnival groups based in the UK and Europe. J P ran the event for two very successful
years.