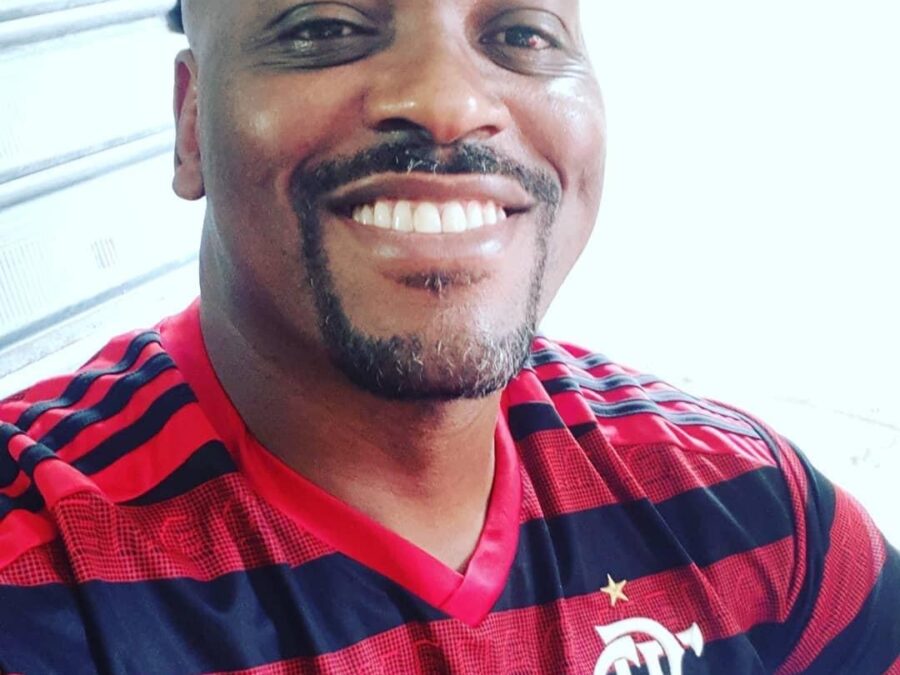 Mauro Jorge do Nascimento, better known as Mestre Maurão, was born in the Cruzada São Sebastião, south of Rio de Janeiro, in 1976. His family was always involved with samba and at that time there was a bloco on the neighborhood called “Baba do Quiabo”. His cousin Tiao Nascimento, was mestre the bateria (bateria’s first director) on this bloco. Despite kinship with Tiao, it was not allowed as children play on the bateria. At that time Maurao and his friends played with cans of paint hanging on the body with string and broomsticks like stick. Baba do Quiabo’s bateria were where he first played.

Later, when he was about 12 years old, his cousin, who also played on Unidos da Tijuca’s bateria, invited Maurão to the mirim bateria of this group. But the first time in Sapucaí was with a School of Samba mirim called Unidos do Ciep.

After many years playing on Tijuca and others samba schools, in 1999 he became bateria director of Unidos da Tijuca at the invitation of Mestre Celinho, where he remained until 2001. From that moment Maurão accumulated experience working as a director in different schools, learning from the masters of the time. In 99 he was called by Mestre Jorginho to be the director of Acadêmicos da Rocinha, where he stayed until the carnival of 2002. In 2001 he was director at São Paulo samba school Leandro de Itaquera. He stayed there for a year. In 2003 he was the director of legendary mestre de bateria Odilon Costa at Academicos do Grande Rio. From 2013 to 2015, Maurão worked as director for Mestre Marcão at Acadêmicos do Salgueiro.

In 2002 Maurao was called to be part of the Monobloco, one of the biggest blocos in Rio de Janeiro, with whom he recorded 4 albums and 2 DVDs, and made extensive tours around Brazil and around the world. He taught on Monobloco workshops for more than a decade.

In 2008 he was invited for the first time to become mestre de bateria. With the Academicos da Rocinha made his debut in the carnival of 2009. Soon in the first year he won a maximum score, taking 10 of the four judges, raising a bateria that was in crisis a year earlier. Stayed on Rocinha’s bateria until 2014 and in that period won the prizes Sambanet, SRZD, and Jorge Lafond of best bateria of Group A.

Soon after leaving Rocinha received the invitation to take the bateria of Academicos do Cubango, samba school in Niterói. He stayed there as mestre de bateria in the carnivals of 2015 and 2016. He did very well there and didn’t loose any point on the bateria and won the prizes SRZD and Oscar of Samba as best drums of Group A. At the same time Maurão was to be bateria director of the Imperatriz Leopoldinense in 2016, accompanying his friend Mestre Lolo, who was also a director on Cubango at the time.

For the carnival of 2017 was contracted to be mestre de bateria of another samba school of Niterói, Unidos do Viradouro. School that already was champion of the Grupo Especial (the samba school contest 1st division) in 1997. In the first year it gained 40 of the judges and in 2018 did not lose tenths and it helped the school to be champion of Group A.

From 2011 to 2018 (eight years in a row) Master Maurão did not loose points to the schools where he was ahead of the bateria (that means at least three ten notes). And in 6 of those years he got 40 of the judges. A great achievement that is due to his didactics and the way to make the suits sound harmoniously. Maurão also plays an important role in creating and developing a new style of bossas de bateria (bateria’s convention). They are bigger and more complex conventions, with the participation of all the suits.