When our Artistic Director, Holly Prest, met a twelve-year-old Farheen Saloojee, both knew that this would be the start of an ongoing, musical relationship.

And, ten years on, they haven’t been mistaken!

At Streford High School in Greater Manchester, Farheen Saloojee was encouraged to pick an instrument that she could learn throughout her years at secondary school and take on to Music GCSE.

‘I’d never done any music, never played an instrument, but as soon as I saw that learning the drums was an option, I thought I’d go for it. The drums automatically comes with that attitude, that stereotype: “you’re a girl so you can’t play drums”, so I picked it purely to show people that they were wrong,’ Farheen laughs. ‘And a female drummer in a headscarf even more so!’

But Farheen’s lack of experience didn’t hold her back. In fact, in drumming she found a brand new passion – and something at which she could really excel.

‘My drum teacher realised I was good and got Holly in to work with me one-on-one. And I thought Holly was absolutely brilliant – another female drummer! I was inspired!’ she recalls.

It wasn’t all plain sailing for Farheen, though.

‘You know, with my cultural and religious background, drumming is not seen as the best thing ever. My parents weren’t overjoyed with my choice. But I decided that I wasn’t going to hide it from my family and my community because I had realised that drumming was going to be part of me for years to come.

‘I got tickets for my parents to come to my school concert and, to their credit, they came. And, better than that, a woman leant over to my parents and asked if I was their daughter and praised my performance – and my parents were so proud!’ Farheen remembers. ‘We have to remember that music isn’t accessible to everyone, for many reasons, but I feel I’ve encouraged others. In fact, I’ve had a parent come up to me and say “you’re the reason my daughter plays the drums”, and that was the most incredible feeling ever!’

Building on the foundations

Coincidentally, Farheen and Holly left Stretford High School at the same time, but vowed to continue working together.

‘Holly invited me to join her band, Juba do Leão, and I started going along to rehearsals, feeling a little intimidated because I was the youngest there. But I soon found my feet and was actually blown away: I’d always been so used to being the only one interested in my kind of music and drumming, but here I was, in a room full of people, all enthusiastic about the same thing!’

Farheen and Holly soon hatched a plan. There seemed to be plenty of younger people eager to extend their drumming skills and repertoire and enjoy performance, so the pair founded a younger sister band, Jubacana.

‘I found the behind-the-scenes of it all, the admin side, so valuable. And co-leading such a big group was brilliant!’ she says.

Participating in the first Future Leaders course was a natural step for Farheen.

‘Again, the music I play isn’t the most common genre, yet I turned up at Future Leaders and here were forty-odd people that wanted to do what I do – it’s such an encouraging feeling, and really makes you want to engage and get better.

‘We had four residentials as part of the course and I don’t know why, but there was something up with me each time: maybe I was fasting, or I wasn’t feeling 100%. But the friends I made there told me that they admired how I got on with things. One time I had a hot water bottle stuffed down my pants!’

Farheen got so much from the Future Leaders course that she was invited back to a subsequent cohort to speak to participants about her experience and her drumming career to date.

‘My work with Global Grooves has definitely sparked my passion for working with young people,’ Farheen says. ‘Jubacana is going from strength to strength, and a placement I did with Global Grooves, alongside some in-house voluntary work, really focused me on what I wanted to do in the future.’

And now, after university, Farheen is still drumming, leading and performing, but also works with students with Special Educational Needs at a sixth form college in Greater Manchester.

‘I’m keeping my fingers crossed that I can bring in my knowledge and passion for music to my work, too. We’re hoping to buy some percussion instruments so the students can have a go at playing, with me teaching, and I’d absolutely love to get Global Grooves in for some workshops,’ she enthuses. ‘The journey continues!’ 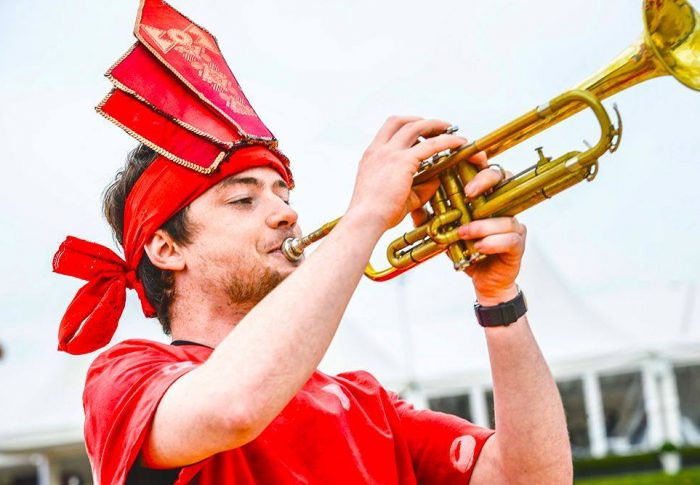 Develop as an artist

Artist-led, Global Grooves is dedicated to making opportunities for the best Carnival artists, to raise up the sector, and bring on new and emerging artists.