Mossley Sports : The birth of a high street giant

Yes, it's true! Mossley is the birthplace of JD Sports! Read the full story and learn more about the history of this high street giant. 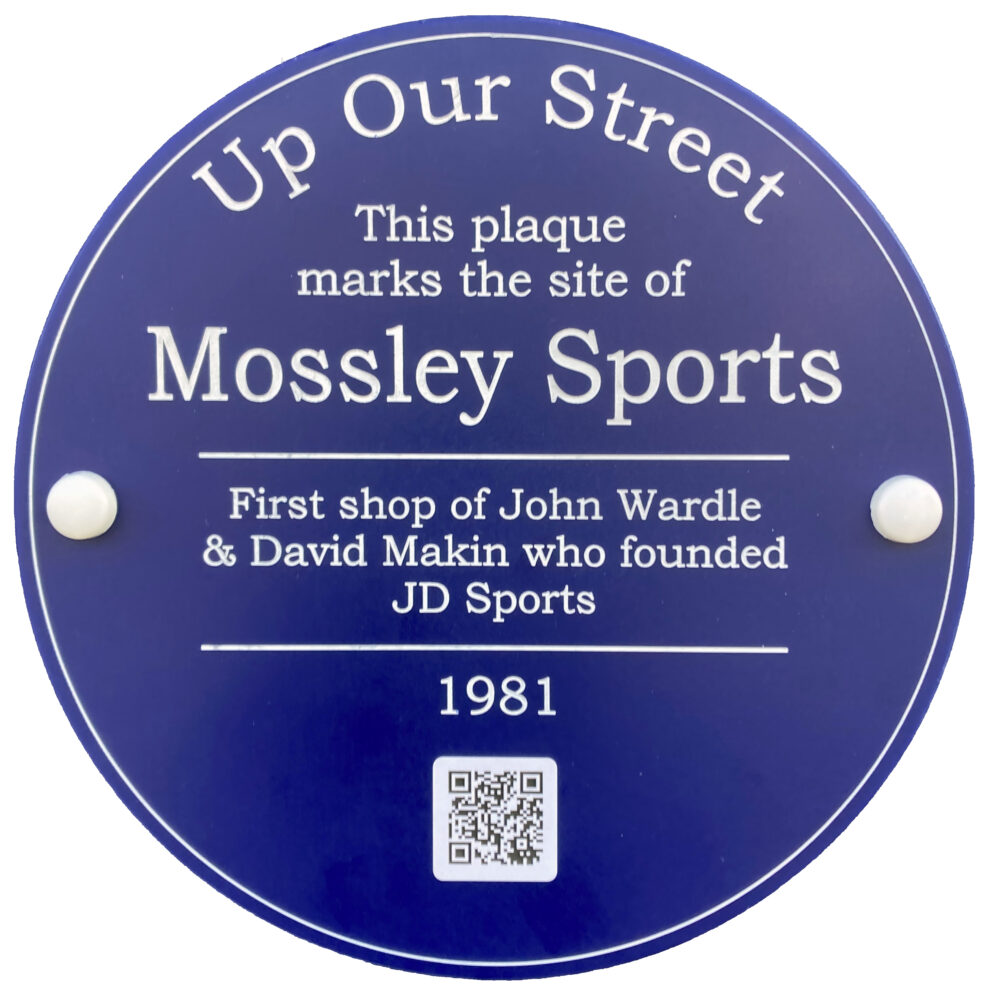 Born in 1944, John Wardle was on his third career when he co-founded the John David Group in 1981 with partner David Makin. In his early 20s, Wardle had joined the Manchester fire department, going on to become a civil servant attached to the Ministry of Defence. Wardle was also an avid sports fan, and in the 1960s had attempted a career as a professional football player, signing for Bolton Wanders F.C. When an injury ended his hopes for a professional career, he took up coaching and joined Radcliffe F.C. as assistant coach in the 1970s.

By the end of that decade, Wardle was developing plans to open a sporting goods store and joining him in the business was David Makin. Aged just 18 at the time, Makin was the son of one of Wardle’s close friends. Backed by funding from both their families, the partners opened their first store in Mossley, calling it ‘Mossley Sports’.

Makin had spotted a new trend among British youth with the arrival of hip-hop music from the US, which brought with it a new look based around sports-oriented branded fashions, championed by the rappers and musicians of the genre. Makin quickly recognised the potential of this new sports fashion trend and convinced Wardle to shift the store’s stock emphasis to this growing new market. Makin’s intuition was spot-on and on the back of their success with Mossley Sports, the pair went on to open their first store as JD Sports in Bury in 1981, and by 1983 the company expanded further, opening its first store in Manchester, in the Arndale Centre.

By the mid-1980s, sports equipment had more or less vanished from JD Sports stores. Instead, the company’s sports fashions range benefited from the rapid expansion of the branded sports clothing market, as brands like Nike, Adidas, Reebok, and Puma succeeded in transforming consumers into walking billboards for their brands across the UK. Backed by the new fashion trend, by the mid 1980s JD Sports went on to open new stores in Liverpool and Sheffield. [1]

The rest is high street history. The business floated on the stock exchange in 1997 and by 2005, when Wardle and Makin cashed in their shares and sold the business to the Pentland Group, JD Sports had 329 stores across the UK, operating under the JD, Athleisure, Open Nike and Size facias. [2]

We’d like to give special thanks to our AMAZING PR Consultant Sara Tieger for all her work in getting this amazing story confirmed for us. Sara contacted mhp mischief, JD’s Communications Consultancy, who told us that John and David did have a shop in Mossley.

Our special thanks also go to Tracey Buckley, Mossley Heritage Centre volunteer, who remembers the shop being based at 10a Stamford Street, next door to the laundrette. The shop is now home to Physio Team Works, a Chartered Physiotherapy clinic headed by founder and Lead Physiotherapist Dave Carter.

///sank.plank.backup
UP OUR STREET
BACK TO PROJECT HOME PAGE