If you’ve ever watched one of our performances and been stupefied by our dance, it’s a good chance it’s been performed or choreographed by Louise Gibbons.

A performer looking for more

Louise grew up studying dance like many British people do: a rite of passage through ballet, tap and modern, taking part in a steady cycle of exams and shows. But when the time came to take her dance to the next level, she decided to study contemporary dance at university, rather than head to a specialist dance school or take a commercial route.

‘I found it the more inclusive and nurturing option, which is much more appealing to me,’ she says.

Between 2007 and 2010, Louise studied at Manchester Metropolitan University and, on graduation, began to pursue the idea of Master’s level study – but, like so many emerging artists, couldn’t afford to take up a place.

Thankfully, Ludus Dance, a dance development charity operating from her home city of Lancaster, was able to give Louise her first break, where she honed her teaching and facilitation skills.

It was during this time that Louise spotted Future Leaders and, without knowing anything about Global Grooves or Carnival, decided to apply.

‘I was one of the older people on the course – I was 25 when I did it – and I was absolutely blown away by the talent!’ she recalls. ‘There were these incredible performers and some of them only 13 and 14!’

At the time, given her talents and her training, Louise considered herself a contemporary dancer – but Future Leaders opened up a whole new world.

‘Future Leaders really got me thinking outside the box. I knew nothing about Afro-Brazilian dance styles, but the course gave me a whole new set of tools.

‘I recently found a reflective exercise I’d done as part of Future Leaders; it was a kind of “what will you take away from this?” kind of question, and my answer summed it all up, really. I’d said that I’d loved hearing about people’s journeys, about how they started projects, about life’s twists and turns, and I remember how hungry and thirsty I was for it all, but I was also a bit lost.

‘Future Leaders taught me that there’s no right path; that it’s great to stay open minded and not always be influenced by other people in my sector. Other people in contemporary dance seemed to be making similar work, but my involvement with Global Grooves has led me to all sorts of places!’

Once Future Leaders came to an end, Louise was soon snapped up by the Global Grooves team to work on an array of projects.

‘I was invited to be part of the new cohort of dancers for Juba do Leão and became their lead artist which I’ve loved. I was so excited to build on and develop my facilitation and choreography skills through Juba but also to enable me to deliver workshop for schools for Global Grooves more widely. And it was through Global Grooves that I spotted an audition notice I wouldn’t have otherwise seen, which led to two years’ worth of touring work!’ Louise says.

The dance performance group she has recently established in Lancaster has also been heavily influenced by her work with Global Grooves.

‘It was only meant to be three workshops in Afro Brazilian dance, but the performers – mainly adults, but some children, too – have been so enthusiastic that we’ve kept it going. At some point in the future, I’m hoping to secure some funding so that we can collaborate with Cabasa Carnival Arts to design and make our own costumes, enabling us to perform at more events.’

Complementary skills and other opportunities

Participation in the work of Global Grooves has also encouraged Louise to get stuck into other opportunities.

‘Global Grooves are such a fab bunch of people, so inclusive and open. They’ve given me the chance to get involved in other things, too, so building on my choreography and movement skills, I’ve started puppeteering, namely with Padmini, the Pteranodons, and Val the Horse. It’s not only fun, but it broadens my skillset. I think I’m going to try stilts next!’ she laughs.

And that broad skillset is increasingly desirable as the arts continues to face challenges.

‘Recently, Global Grooves commissioned me to work with the Sarah England School of Dance in Stalybridge, to come up with new work for the Tameside Winter Carnival. I found the Dance School to be really open minded, which is rare, and the dancers were keen to talk about options for performers that don’t go down the commercial route.

‘I was so keen to show them that Global Grooves is the perfect way to get involved. That I didn’t have all the answers or my career mapped out, but Global Grooves showed me lots of ways to develop my skills.

‘I’ll be forever grateful to Global Grooves and Future Leaders. It’s the reason I’ve been to Brazil three times; the bands I’ve been involved in, the gigs and workshops. It just doesn’t feel like work.’ 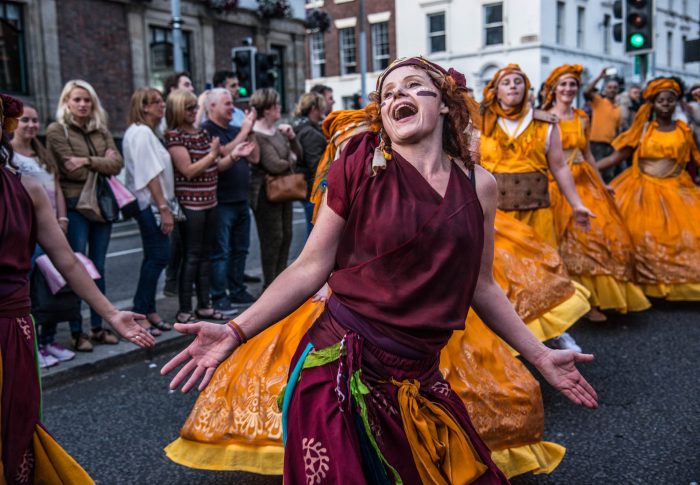